The United States Flag is beautiful.  Throughout our country's history, the flag has changed many times.  The general concept remained the same, but the number of stars has changed repeatedly as new states were added.  This gave the country an interesting mathematical challenge - how to arrange n stars in a rectangle in an aesthetically pleasing way.  America may once again be faced with this challenge if Puerto Rico becomes a state.  I think that many Americans dread this - not because they dislike Puerto Rico, but because it would mean fitting one more star on the flag, and ruining its symmetry.  Well, rest easy, America.  Its symmetry is not in jeopardy.  There is already a plan for a 51 star flag that is quite symmetrical.  But this begs the question: what are the techniques for fitting n points (stars) into a rectangle? 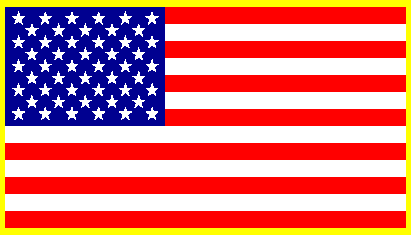 Let's start by analyzing the current 50 star flag.  It may surprise you to learn that the arrangement of stars on the 50 star flag has nothing to do with the fact that 50 is a multiple of 10.  The fact that 5 x 10 = 50 does not matter.  The more relevant fact is that (9 x 11 + 1) / 2 = 50, as you will understand in a few minutes.  The 50 star flag is what I call a 'checkerboard' flag.  Checkerboard flags are when you cover the blue region of the flag in a checkerboard pattern, and you put stars only on the white squares.  This is why the 50 star flag seems to be made up of diagonal lines; the diagonal lines are like the lines that a bishop moves along on the chess/checkerboard.

Also note that we can swap the colors and have a flag that is a mirror image of the original.

It gets more complicated, though, if the number of squares is an odd number.  If it is an odd number, then you cannot just divide by 2 to get the number of stars - you would not get an integer.  What you do instead is divide it by 2 and then take the integers above and below your answer.  For example, if the number of squares is 99, you would divide by 2 to get 49.5.  Then you would take the integers immediately above and below this answer: 49 and 50.  This means that you can get a 49 star flag or a 50 star flag, depending on which squares you pick to be white.  If you pick the corners to be white, you get a 50 star flag, and if you pick the corners to be black, you get a 49 star flag. 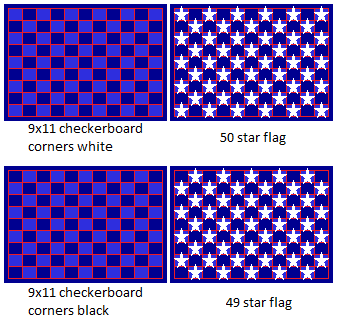 That 9 x 11 pattern with the corners white is the standard pattern for the current United States flag.

This gives us two new equations:

There is one more kind of flag we have not talked about.  This is a simple grid flag.  It is like the checkerboard flag except that you put stars in all of the squares, not just the white ones.  The formula for this kind of flag is simple and hardly worth elaborating on:


Putting it All Together:

The goal, now, is to find a suitable pattern for a given number of stars.  So, given 51 stars, what patterns will work?  The mathematics make this easy.  Just solve all of the above equations for rows x columns, like this:


This technique can be used to find suitable flags for all the numbers from 50 to 100 except 62, 79 and 89.  Many flags have several suitable arrangements.  Here are arrangements for flags 51 to 70: Now you must be wondering what you can do with a 62, 79 or 89 star flag.  Actually, there are plenty of options.  But that is for another post.

You will notice that there are only five simple grid flags in the above display: 54, 60, 63, 66 and 70.  Good grid flags are quite a bit more scarce than good checkerboard flags.  And, frankly, I do not think that grid flags look very good.  All of the grid flags shown here could be replaced with checkerboard flags of the same number of stars.  I chose to use the grid flags in this display for the sake of diversity, but if it were up to me, they would all be checkerboard style.  The only grid flag that I like is the 48 star 6 x 8 grid flag, and that is only because it was used in World War II, and raised in the famous photo at Iwo Jima.

There are a couple more interesting styles of flag, but they will be left for a later post.  If just one reader sleeps more easily knowing that we do not have a 51-star flag crisis looming, my work here is done.
Posted by Daniel Edwin at 1:41 PM 10 comments: